is a municipality of about 16600 inhabitants in the Province of Como, in Lombardy.

Defined by Cesare Cantù “the friendliest of Brianza”, Erba is a town composed by some residential areas completely immersed into the green, from important historical villas with parks and gardens, to lonely farmsteads in the country. Also the origin of Erba is rich of charm and mystery: the human presence of pre-Roman age is attested by the remains found at Buco del Piombo (an impressive Jurassic cave of limestone that is extended into Alpe Turati) and now hosted in the local civic Museum. The first village probably was Incino or Vill’Incino, in Roman age known as “Licino forum”, while the area of Erba was named “Herba”. the ancient Church of Sant’Eufemia is driven to this period: dated back to V century, it is a small jewel that has endured modifications and extensions. To be immersed into the history and lose yourself into the alleys looking to the past is necessary to visit the Hamlet of Villincino, ancient medieval centre, times ago completely rounded by stonewalls, those still possible to observe one of the access doors, characterised by the particular mullioned window. The local administration has skilfully restructured the entire area, trying to keep unchanged forms and colours, so recreating a markedly medieval atmosphere. Few steps are enough to return almost to present: crossing the public Park Majoni you reach the Giuseppe Terragni’s War Memorial; going up its stairs till the top you arrive at Licinium Theatre. The magnificent building, erected in 1928, takes its name from the consul Romano Licinio, commander of that ancient colony would give rise to the town. 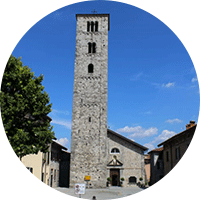 Start from Erba railway station, cross the city centre, then Via Dante, Via Fiume and Via Alessandro Volta and reach Piazza Vittorio Veneto, that hosts the largest market of this area since 1400. The plebeian church of Sant’Eufemia (V century), that also could be visited inside, is not far.

Sant’Eufemia Church is built in the same name square. It is an ancient Romanic church dated back V cent.. It shows up like a long and high monoapsed nave with accessory rooms. In the course of time it has endured some extensions and upgrades, one of them in XVI cent. with the elongation of the nave till the eastern wall of the bell tower.In front of the church originally there were the baptistery, broke down during XVI cent., and the graveyard, dug up during the excavations in 1994.
To the North of the face there is the Romanic bell tower of XII cent.. The nave has rectangular plant and has, on the right, a chapel that conserves a fresco of late ‘300, commissioned with specific decorative intent by the Parravicini’s and destined to adorn the San Bartolomeo altar.
The apse, one of the most ancient part of the church, is semi-circular; in the external part, it is divided by four lesenes, and also it has a decoration made by a typical horizontal angular bricks bands.
In the internal part, the most important work is a wood Cross painted in XVI cent. with the Christ image, in Giotto’s style, restored in 1983. 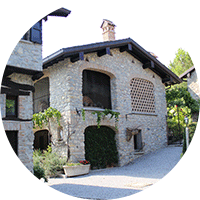 From Piazza Vittorio Veneto continue to Via Licinio and reach the medieval borough.

Those who love romantic places, full of romance and charm, must visit the hamlet of Villincino near Erba.
Between the 12th and 14th century, this was an active medieval centre, surrounded by stone walls and closed by gates at both ends.
One of the gates still presents an exquisite mullioned window.
At the end of the so-called contrada, indicating a district, you can find the pusterla, postern, and the house of the gabelliere, the medieval tax collector.
Nearby you can also admiring buildings dating from 12th century onwards.
Once you walk in this small village along the cobblestone road, you can appreciate old farmsteads and their typical stables or catch a glimpse of lovely private courtyards and blooming gardens beyond the doorways.
This village has been carefully restored and efforts have been made to give back the very same festive atmosphere characterizing this village in the Middle Ages.
Nowadays Villincino is a residential area. As there is neither traffic nor shops, after a few minutes it is like living in a time warp. As if you are most likely to encounter a dame with an elegant crown and a knight dressed in lively colours or to join the procession of a pagan feast, heading for the church of Sant’Eufemia(St. Euphemia) where everyone will be banqueting with polenta and wine.
However, you do not need to travel back in time to see such an event: on the third Sunday of October, the inhabitants of Erba join the feast of the Masigott, the greatest feast of the village.
In the square before the church of Sant’Eufemia, you can enjoy some polenta and other typical dishes. Besides, you cannot miss an event whose roots can be traced back in the past: the climbing of the greasy pole, which is a feat of strength for those who attempt to be the first to reach the top and grab the prize. 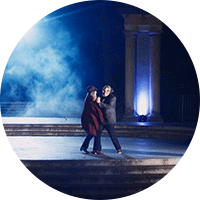 Cross Park Mainoni, continue to Corso B. Bartesaghi, Via Ferraris and Corso XXV Aprile until to reach walking the Stairs of War Memorial created by Terragni. At the end of the stairs is possible to enter The Licinium Theatre.

Licinium Theatre overlooks Erba, to reach it you have to walk up the long stone staircase of the War Memorial. The ascent climbs through a hallway of cypresses, trees with a historical and mythological solemnity: back to Greek legend, Apollo, taken pity of young man who didn’t find peace after a sorrow, transformed Ciparisso in a cypress, to put an end to his pain.
The echo of the old tradition has its peak with the visit of Licinium Theatre that, completely immersed in a natural context between trees and sky, it comes up as a classical theatre: it is an esedra with a monumental fixed stage, without borders and completely uncovered. To enrich the scene there is a simple classical arcade and the elegant semicircular staircase that bring you to the stage. A particularity of Licinium Theatre is the presence of a second grass stage behind the parterre, immersed in the green, with a suggestive stone staircase. The ancient aspect has a recent origin: Licinium Theatre is dated back to 1928, built for Airoldis’ will, who named it Licinium, a theatre of Greek inspiration, in honour to Roman consul Licinio, founder of the colony that gave origin to the town of Erba.
In less than a century, Licinium Theatre hosts several shows: from Euripides’ tragedies, to the great success “The Passion” , till the most caustic satire. Since the end of ‘60s, Licinium Theatre fell slowly into the oblivion, until 1993, with the foundation of Accademia dei Licini. The academy gave a new life to the theatre: the production was totally dedicated to Shakespeare’s operas.
As Orson Welles said: “Theatre resists like a divine anachronism”. There are not better words for Licinium Theatre. From the successes of the past, through bad periods, today it is the only one Italian open-air theatre. Licinium resists, giving to its public a magic and out of time atmosphere, between classical aspect, 20th century history and modern theatre.
Itinerary

HOW TO REACH ERBA

By Car:
From Como: get SS 342 in direction to Lecco

From Lecco: get SS 36 in direction to Milan and exit at Como/Erba 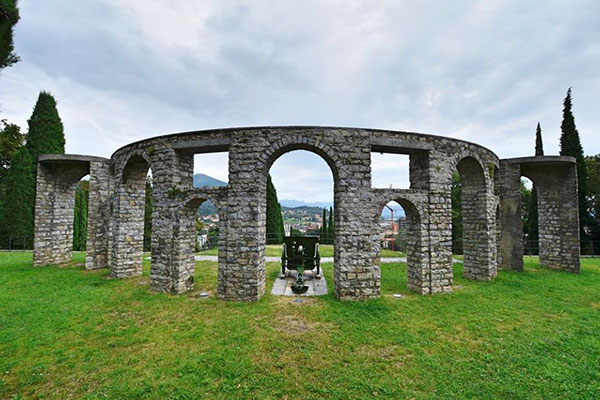 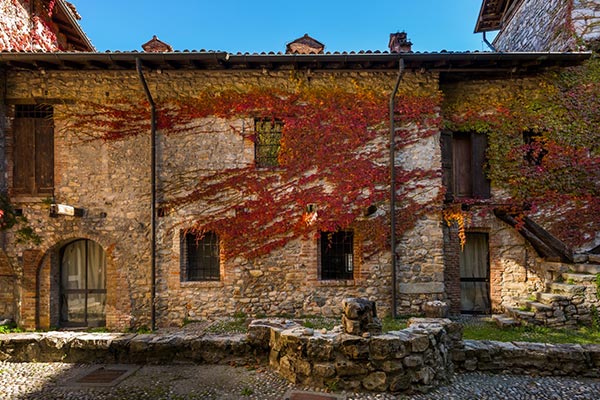 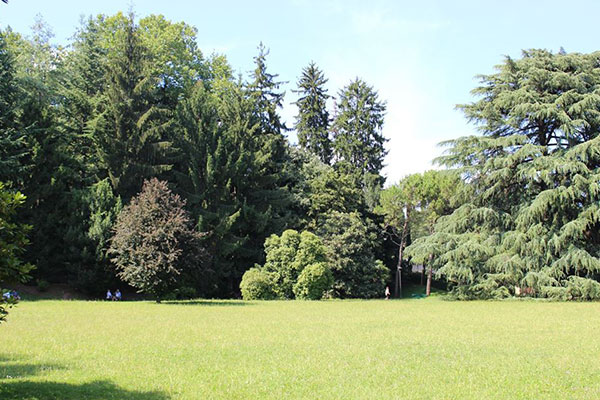