is a municipality of about 2800 inhabitants in the Province of Como, in Lombardy.

Eupilio is a village relatively recently founded: it was born in 1927, when the five different districts (Corneno, Galliano, Mariaga, Carella, Penzano) were united, each one had its rural characteristics, history and particularities. The union of these different built-up areas makes the village rich of churches, chapels, niches, not only places of cult but also noble villas, ancient castles and fortifications, touchable testimony of human presence during the centuries.
The Medieval Tower is an example of one of the most ancient elements of the territory, that its mainly defensive and military function explain its position on Molvesio hill. This hill gives back a great charm, but certainly is from Mount Cornizzolo that you can enjoy breath-taking landscapes. Known also with the name of “Pedale”, this green upland is clearly different from the other nearby mounts, boasting a variable flora ables to adapt to the altitude, to the exposition and to the nature of the ground. From its peak is possible to admire the other characteristic element of this small village of Brianza: its small lakes. From Segrino Lake, in fact, the water slots in the valley that crosses the village, until Pusiano Lake, where Centro Remiero, sportive excellence of the territory, overlooks it. Two lakes, Segrino and Pusiano, are connected by a Cycle Route, that enhances territory, giving the conditions for an healthy and green approach to the environmental attractions those characterise it. After all, the name “Eupilio” could have origin from a Greek locution that means “great door”: Plinius the Elder, in fact, used the expression Eupilis lacus in Historia naturalis, then recalled by Parini in vago Eupili mio. 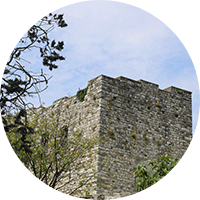 Reach the town centre, visit the Tower and the historical wonders following Via Lecco, Via Segantini, Via Scheibler and Via S. Vincenzo

Margherita Sebregondi, for all “Ghita”, was a young girl from Milan who has lived in XIV cent.. She was waiting the return of her lover Cecco from Flanders, where took place a bloody war. After several months, without any news or letters from Cecco, Ghita chose to ask help to a wizard. Despite of his mysterious identity, everybody endorsed his talent for clairvoyance. So, Ghita decided to be helped by him to finally have news from Cecco. But the wizard was a criminal, who raped dupe girls to sell them to his boss, the Spanish Don Alfonso Carpano. Don Alfonso, struck by the beauty of Ghita, ran away from Milan and shut her in the Tower of Galliano, on the slopes of Molvesio hill. Cecco, got back from the war, knew the kidnapping of his lover and rushed to the tower, sure to free Ghita…
The story, taught in Brianza and in Milan during the XIX, continues between twists, turns and fights, but the most important aspect is that the description of the Tower of Galliano as an impregnable structure. Looking at the medieval tower dated back to XII cent., that arisen over the trees of Molvesio hill, it is evident how its structure is imposing and fortify, not conform to residence but built as military defence. The town is not on the top of the hill, but in another strategic position, where it was possible to protect the way to Segrino Lake and observe all the other defence spots of the territory. The military nature is confirmed by the presence of a castle not far from there and it is demonstrated also by historical documents.
The district of Galliano was in fact the house of Carpanis, ancient owners of these lands. The medieval tower is one of the ancient building of Eupilio, which is rich of other points of interest with great artistic and historical value. Following the streets of the historical centre, a must is the Church of San Giorgio in Corneno, probably built in XIII cent. and it is not coincidence that the church is dedicated to a holy warrior given the proximity to the tower. The pipe organ of the San Vincenzo Church in Galliano has great value, too. This church can be visited continuing the walk through the streets of the historical centre. Totally, you can visit five churches, one for each hamlet which has composed the town, built from XIII to XVI cent..
Itinerary 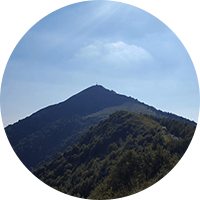 Start from Segrino Lake and, through Via Cornizzolo, reach the Mount walking two hours and an half.

The best way to enjoy the wonders of lakes and mounts of Brianza is to observe them above. You have to reach one of the top of these mounts, a challenge that could discourage lots of tourists. Mount Cornizzolo is different from the other mounts of Triangolo Lariano: compared with Corni di Canzo, Mount Rai or Moregallo, Cornizzolo presents a greener and gentler profile. Reach its top is a good idea to spend a day completely immersed into the nature and take panoramic photos of the stunning views. Mount Cornizzolo lays its mysterious charm all along: in the past, it could have wrapped up also Leonardo da Vinci. Some researchers agree upon recognize Cornizzolo as one of the painted mounts on the background of the Leonardo’s “Virgin of the Rocks”, 1482.
To reach the top of the mount and to be charmed by its landscapes, it is suggested to start from the banks of Lake Segrino, continuing along Via Cornizzolo, till Alpe Carella; there you can leave your car to continue the excursion along the narrow path that bring you to Rifugio Marisa Consiglieri. Following the indications spotted along the trial, the first part of the of the walk flows through green grazing lands. The sound of bells indicates the presence of cows in the pasture, as you can feel to be observe by nice mountain goats.
Looking to the sky, you can easily see paragliders and hang-gliders chase drawing circles into the air. Cornizzolo is the seat of Aero Club Monte Cornizzolo, an important flight school, often theatre of national and international competitions. Before to reach Rifugio Consiglieri, open every Sundays, there the last curiosity. You can see the big centuries-old hawk probably where Giovanni Segantini, painter, used to recover himself under the shade of the tree to draw. Finally reached Rifugio Consiglieri (1100mt), you can relax before to face the last part of the walk, that brings you to the mountaintop of Cornizzolo, at 1241 mt. On the peak there is an impressive iron cross that substitute the stone one, today located nearby the Alpini Chapel. Reached the top, you can enjoy the stunning view above the lakes and the other peaks of Brianza.
All this beauty make you feel so small… The philosopher Bernardo di Chartres said that we are dwarf on the shoulders of giants. The “Giants” were the knowledge of our fathers, but this image remains to a perfect description of a hiker on the shoulders of Cornizzolo: he can see, with its littleness, further than the mount that sustains him.
Itinerary 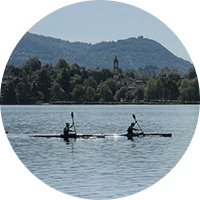 CYCLE ROUTE OF THE LAKES WITH CENTRO REMIERO

Reach the Cycle Route getting the ex-S.S. 639, that in 20 minutes brings you in Penzano from Segrino Lake. The lath takes an hour of walk.

CYCLE ROUTE OF THE LAKES WITH CENTRO REMIERO

The lands of Brianza are consider one of the paradise for bicycle: thanks to the several slopes, pleasant route along the lakes and strong rises, it is adapt to every kind of bike lover, from occasional bikers to the experts.
The evident predisposition of the territory has permitted the creation of the Cycle Route of the Lakes. It covers 270 km (310 km if you consider the ring paths), touching 14 lakes of the provinces of Como, Lecco and Varese. Among the available itineraries, one of the most accessible is that flows around Eupilio, starting from the banks of Lake Pusiano to Lake segrino. The start of the suggested cycle route corresponds to another temple of sport, as bicycling, permits to immerse yourself directly into the nature. Eupilio hosts the Centro Remiero of Lake Pusiano, without any doubt one of the newest and best rowing centre of Italy. The water of Lake Pusiano, thanks to its totally absence of wind, is ideal for teaching young athletes but also for professional training. In fact, Centro Remiero has hosted not only the National Italian team, but also the best crews of the world, coming from Japan, United States, Poland and Norway.
Leaving behind canoes and their wakes on the water, as accurate cuts on a canvas, you start to go biking from Penzano locality to the centre of Eupilio. The path, suitable also for families with children, in about 20 minutes brings you to Lake Segrino. Passing through the centre of Eupilio you can admire not only the landscape, but also one of the historical and cultural attractions of the town, from churches to the medieval tower that rises up above the trees of Molvesio Hill. Reached the banks of Lake Segrino, you can complete the tour around the basin, considered the cleanest in Europe. The ring path is about 5 km long an there you can admire the wonder of the landscape and the unpolluted nature. These places are not only destinations of amateur journeys by bike, Eupilio is also a passage point for expert bikers. Following the main street that brings you to Canzo, from there you can reach Madonna del Ghisallo, locality named to the patron saint of the bikers; usually bikers rise to there from the north face. These routes are a part of Giro d’Italia history.
Itinerary

From Lecco: get S.S.36 in direction to Milano, then exit at Como/Erba

From Milan: get S.S. 36 in direction to Lecco and exit at Cesana/Annone/Suello/Oggiono/Galbiate 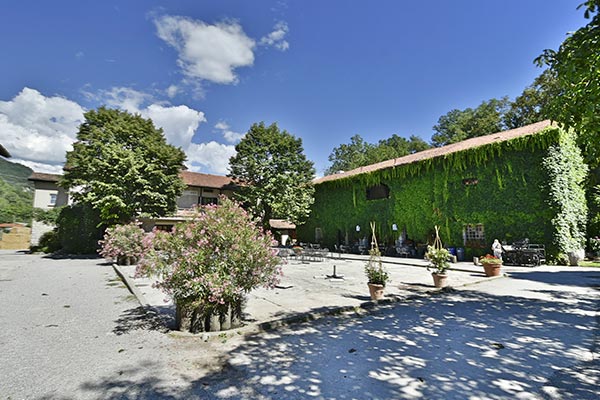 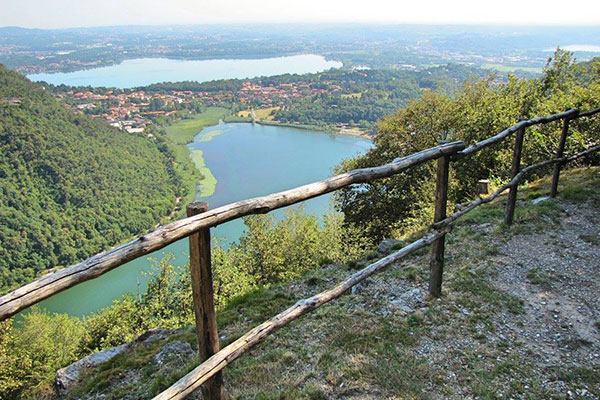 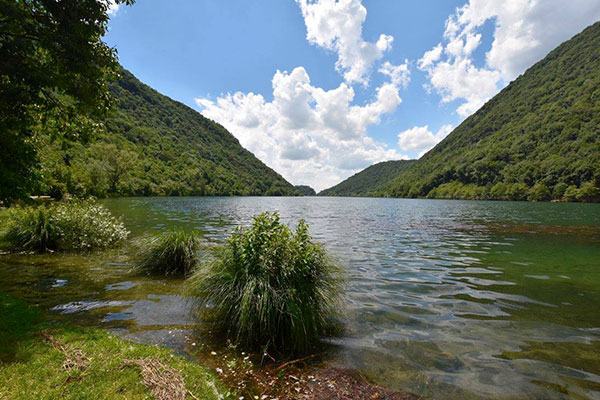