is a municipality of about 4200 inhabitants in the Province of Como, in Lombardy.

Merone is a village with a farming past, connected to the plantation of vine and mulberry, which has known a great industrial change since 1928, when started to work what is known today as “Cementeria di Merone”. As others towns spread in Brianza, Merone is an area rich of farmsteads, but its ancient origins are proved in particular by the remains of the castle. Private home of several noble families, as Marchesi Carpani, today, unfortunately, remains only a tower that attests the old splendours. The Municipality, applied by a project of requalification of the old beauty and vitality of a zone that few times ago was marginal, has contributed to the creation of Baggero Eco-Village. A system that wisely puts in evidence the attention to men and to the environment, promoting an ecological tourism, by eco-sites, a new urban eco-park and a bike-sharing system. In Baggero you can also visit the Oasis, that reveals its original history connected to the local industrial tradition and its development. Lambro river and its flow, in fact, have strongly affected on the economic growth: using the traction power to activate presses, mallets, mills, and then silky industries, it was possible to obtain low cost energy. Walking through the routes, immersed into the nature and tidily grown, not only you can lose yourself into another reality, far from the urban racket and the grey of the cement works, but you can immerse yourself in the past, thanks to restoration of Baggero Mill, dated back 1722, and the historical clogs factory San Giorgio, where the artisans wisely express their art. 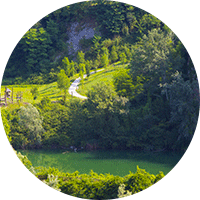 Go, from the Merone railway station (Via San Gerolamo Emiliani), to Via C. Battisti, where enter the Oasis. The visit of panoramic rock and the waterfall has a variable duration, approximately an hour.

In Merone, in the area bordering Lambrugo, the hamlet of Baggero has become the symbol of environmentally friendly land regeneration. At first glance it may look like a mere green oasis where to relax, it is in fact the tangible proof of the eco-friendly transformation the area of Merone has decided to undergo. In the past, Baggero was a lively place: fields were crowded with farmers and several local workshops used waterpower from the mills located along the Lambro river. As years went by, this place changed, fields got emptier, workshops were closed, and the village life shifted to the industrial area, above all around the cement plant. Baggero turned into a drab place of passage and it was later deprived of its beauty when it began to be exploited as a mine. However, many people still remembered its old beauty with nostalgia and recognized its potential. This is how this innovative project was conceived: transforming Baggero into an eco-village. Theplan, unique in its genre in Italy, aims at renovating the area in respect of nature. This dream has soon come true, as you can see by visiting Baggero. The mine has become a small oasis featuring two dams, perfectly integrated into the lakes of the so-called Triangolo Lariano (Triangle of Lario, the area comprised within the two southern branches of Lake Como). The watermills have been restored and are now powered by the rushing waters of the Lambro river. A valuable guide for visitors through the paths crisscrossing carefully cultivated maize fields and scented woods, where leverets and sparrows live happily. 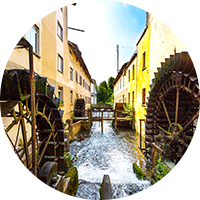 Water is life. In Merone, this has never been merely an empty cliché. The continuous flow of the Lambro river reminds that the economic growth in this area has been mainly driven by watermills. At the end of the nineteenth century, there were ten of them, including the still existing one at Baggero. The main local activity was agriculture and the most widely grown crops were wheat and maize. The flow of water, causing the water wheels to turn, provided power to drive the grindstones, which milled corn into flour for polenta. Later, an intense commercial and manufacturing activity grew.Spinning mills and clog factories were built, which relied on the force of the river water and on the constant power provided by watermills to drive their industrial machinery. At the end of the 1960s, the soft rhythm of the water wheels caressing the river surface ceased. The factories left room to heavy industries and the mills suspended their activities for decades. As Baggero got emptier and its enthusiasm faded, it became a sad drab place. When the renovation of Baggero was included in the project for the creation of an eco-village, it was evident that the mills were not only part of the area, but they also represented a way to produce renewable energy by exploiting local resources. The renovation process has been challenging, but it is such a pleasure now to see the Lambro caressing the waterwheel again and listen to its gurgles as it softly crashes against the mill. Furthermore, the energy generated here is stored in a power station so that it can be used again. The mill renovation has given new life to Baggero: on Sunday, people flock here to see the inside of the mill and every day tourists come to visit the only existing workshop or just to take a stroll along the paths of the eco-village. Thanks to the mill, water resuscitates life. 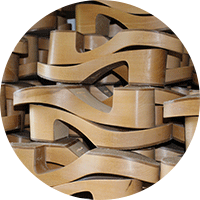 Continue to Via Giuseppe Mazzini to reach the masters “zecurè” Sangiorgio, artisan activity, born more than 90 years ago and that is still producing handmade wooden clogs. Duration of the visit: on discretion of the visitor.

A historical place, nowadays unique in its genre, sits in the heart of Baggero eco-village. It is the clog factory belonging to the Sangiorgio family, who has been running their workshop for three generations. In 1922, Vincenzo Sangiorgio began to manufacture and sell wooden footwear, teaching himself clog making, thus becoming a zecurè, a clog-maker. Just a few steps away from Lambro river, this was the ideal place to set up such activity: the force of the river water was exploited to power machinery and the nearby woods of plane trees, also called “clog trees”, provided wood. At the time, the demand for clogs was very high and Mr Sangiorgio was happy to bequeath his flourishing and promising activity to his son. Unfortunately, the boom in plastic of the 1970s sapped Sangiorgio’s business. However, the family decided not to betray the trust the first founder and the locals had in them. They rejected the idea of getting a permanent job in a factory. Thus, they downsized their activity and made customization and high-quality materials their distinctive strong point. Nowadays, Roberto Sangiorgio, the only remaining “zecurè” in Lombardy, takes care of his customers from behind his workbench in his see-through workshop. He helps them choose the style, the colour and the material of their footwear and moulds a shoe to fit their feet perfectly. While looking at him putting together wood and leather with mastery and expertise, you cannot help thinking sadly that the fascinating art of clog making will be lost.
Itinerary

HOW TO REACH MERONE

By car:
From Como: get SS 342 in direction to Lecco

From Lecco: get SS 36 in direction to Milan and exit at Bosisio/Merone/ Erba

From Milan: get SS 36 in direction to Lecco and exit at SS 342 in Nibionno 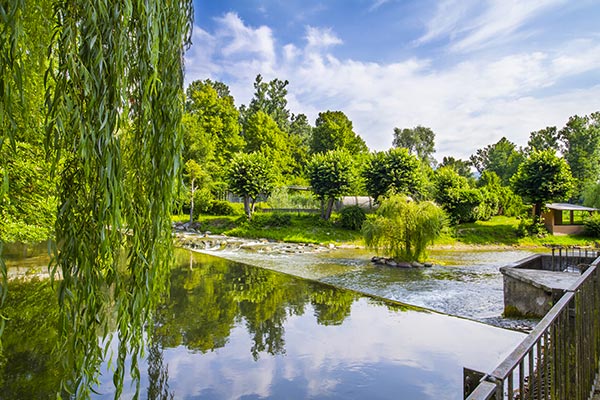 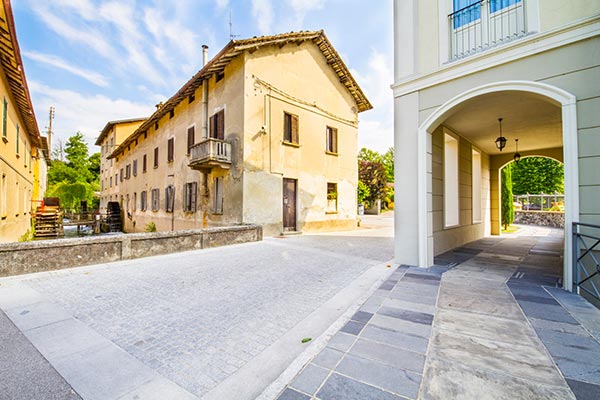 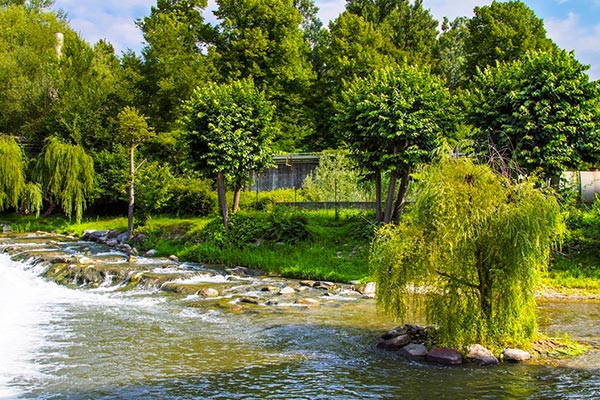