is a municipality of about 1400 inhabitants in the Province of Como, in Lombardy.

Pusiano is a small border village of Brianza. Last town of the province of Como, it is placed along the axis that connects Lecco and Como. A part of the Parco della Valle del Lambro and Comunità Montana of the Triangolo Lariano, the small village raises on one of the most beautiful minor lake of Brianza. A legend tells the lake bottom keeps the head of a dragon, beast become famous by the religious story of Saint George and the Dragon. Pusiano Lake, unique one between the Pre-Alps lakes, hosts a gorgeous island, known as of Cypresses because of its characteristic trees. Of private property, actually the island could be admired thanks to the circumnavigation with the ecologic and electric-power boat “Vago Eupili”. Pusiano was residency of famous people, as Viceré d’Italia Eugenio Beauharnais, Napoleon’s stepson, that the namesake building, rounded by a visitable Italian garden, is the seat of the City Hall. On the slopes of Mount Cornizzolo, between trees and routes, there is the Sanctuary of Madonna della Neve. The holy place is reachable in about twenty minutes, walking the picturesque “Sentiero delle Cappelle dei Misteri del Rosario di origine Teresotta” that starts exactly from Palazzo Beauharnais. 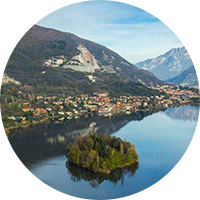 Starting from Via Mazzini, go to the pier to get the boat “Vago Eupili”. The visit to the lake has variable duration, it depends of the typology of service chosen.

Lake Pusiano is a basin of glacial origin, naturalistic jewel set between Mount Cornizzolo and the southern hills. As a precious jewel, Lake Pusiano shines to visitors thanks to its pearl. In fact, looking at its water, you can find Island of Cypresses, a little point of land in the water, not far from the northern bank of the lake. As a drop of dark green ink on the water, the island gets its name from its 130 cypresses. It was lived 10-15000 years ago, as the remains of a rudimental village of palafittes testimony, the island passed to several owners. In 1300 it was a property of the Bishop of Milan, in the next centuries passed to the Carpanis. In 1700 and 1800 were the centuries known as “The Three Princes”, while the island hosted Arciduca Ferdinando Carlo d’Asburgo-Este Lorena, Eugenio di Beauharnais, Napoleon’s stepson and Vicerè d’Italia and Arciduca Ranieri d’Asburgo The Hapsburgs maintained the control on the island till 1831. From 1831 to 1874 the destiny of the island was confused, then the Gavazzis bought it and today they still the owners of the island.
In a naturalistic view, the island is reach not only of the typical cypresses but also of several species of animals. Gerolamo Gavazzi loved exotic animal he created a small open-air zoo on the island. Beyond the typical animals as ducks, swans and herons, the isle hosts squirrels, peacocks, turtles, hares, storks, cranes and incredibly, some wallabies, small kangaroos which easily became the main attraction of the isle. You can have an excursion on the lake to appreciate, directly from the water, the wonders and the history of Pusiano. Thanks to the electrical boat “Vago Eupili” is possible to tour the entire lake and sail around the Island of Cypresses, to admire it closer. If you do not settle by the lake, there are guided tours on the island during the year, thanks to the Gavazzis and the Gerolamo Gavazzi Foundation. There is also the new boat Enigma, that uses the energy of the sun, in the maximum respect of the environment where it works, there are planned more than 50 landings on the island during the year, to appreciate the villa and to make some photos the wallabies. 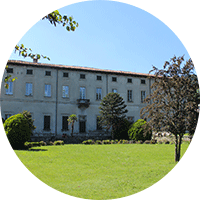 Reach via Mazzini and stop at number 39. Book the visit to the building, with variable duration, by the Association “Promoterre Pusiano”.

The territory of Pusiano is characterized by the enchanting Palazzo Carpani- Beauharnais . In front of the lake, the palace was privileged protagonist of 500 of history, where famous people has lived in its rooms. The Palace was built by the Carpanis in the end of XV cent.. There are not documents of the ends of the works, but it was certainly built before 1521, as clearly indicated by a bronze plate located in the ceiling of a room in the most ancient part of the building. The original Palazzo Carpani is characterized by a column parvis at the ground, that supports the rooms of the first floor. The most important room is without any doubt the great Room of XV cent., where you can admire the wooden ceiling perfectly conserved with the bronze decorations. At this original part, during 1600 was added the eastern part of the Palace, characterized by a column parvis and arches. After the Carpanis, the Palace hosted for a decade Napoleon’s stepson, son of the next wife of Napoleon, Giuseppina di Beauharnais, but also Viceré of the Italy Kingdom. From 1805 to 1814, Eugenio di Beauharnais focused to the external part of the building: luxury and horses lover, he built the marvellous Italian style gardens that you can admire in their splendour. The legend describes Eugenio di Beauharnais as an eccentric person: for example, he has chosen Palazzo Carpani as his home because it was the only one building that permitted to enter the bedroom by horse. The palace could be also chosen for its comfort and the shelter against potential assailants. From the palace, reach the enchanting Island of Cypresses by boat was easy; the legend tells that the lovers of Eugenio liked to spoon with him in the lonely property on the Island.
From 1830 the Palazzo Carpani-Beauharnais passed to the Cortis, who modified a part of the structure to create a spinning plant to breed silkworms. After a century, the building became a convent and a school, under the managing of Padri Rosminiani which got the property. From 1986 is a municipality property, that thanks to “Promoterre Pusiano” Cultural Association, organizes dedicated tours to the Palace, in order to permit to everyone to discover the wonders and the history of the building, symbol of Lake Pusiano. 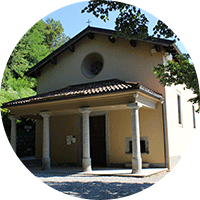 Start from Palazzo Carpani Beauharnais, go to Via Roma or Via Martinelli and reach the lath that bring you to the Sanctuary of Madonna della Neve. Duration of the itinerary: 20 minutes; duration of the visit of the interiors: 10 minutes.

The legend tells about a rich noble of Rome who, in the night of 4 August, appeared Virgin Mary. The request of the Virgin was to build a church in the exact point where should be snow on the ground. The noble, incredulous of his dream, ran to Pope Liberio, who confessed to him to have dreamed the same vision. It was not a case, and the desire of the Virgin should be absolutely satisfied…
In Pusiano there is the Santurario della Madonna della Neve, which seems to not have any connection to the legend. Just the inhabitants of Pusiano have a particular veneration for Virgin Mary, so it was built a dedicated shrine.
The sanctuary rises above a natural terrace of the slopes of Mount Cornizzolo, where you can enjoy anenchanting view above all Lake Pusiano. The probability to find snow there, during august, are null; the walk to the sanctuary is worth to the rare possibility that this event takes place in front of you. Beyond the legend, from the centre of Pusiano you can easily find the start of the path that brings you to the church, walkable in every season and located between Via Montandon and Via Martinelli. From there, you rise up gently to the small church, walking on a simple mule track. During the rise you can see the 15 chapels dedicated to the Sacred Mysteries of the Rosary, represented in bas reliefs of false bronze. The silence, the reflection during the walk, the atmosphere created by the sacred place, give to this rise a symbolic shade. The thoughts are stopped when you reach the church. Dated back to XVI cent., the church has an external façade with a deck under a small window. The interior of the shrine is simple, too: the nave is covered by wooed roofing and introduces the presbytery that hosts the altar and the remains of the original frescos. On 4th august of every year, Pusiano hosts the Festa della Madonna della Neve, and for it the town lights up with the traditional “lumit e balunit”. The best moment of the event is the fireworks show, which reflect into the water of the lake in a unique and breath-taking show. You can return by the same path, or you can reach Parco del Roccolo, where you can relax and enjoy the beautiful landscape above Pusiano and the Island of Cypresses.
Itinerary

By Car:
From Como: get SS 342 in direction to Lecco

From Lecco: get SS 36 in direction to Milan, then exit at Como/Erba 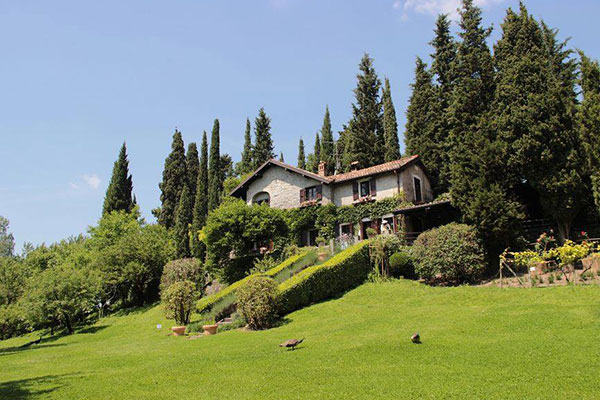 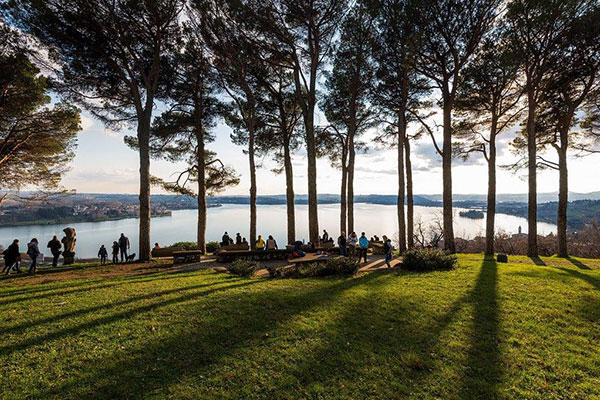 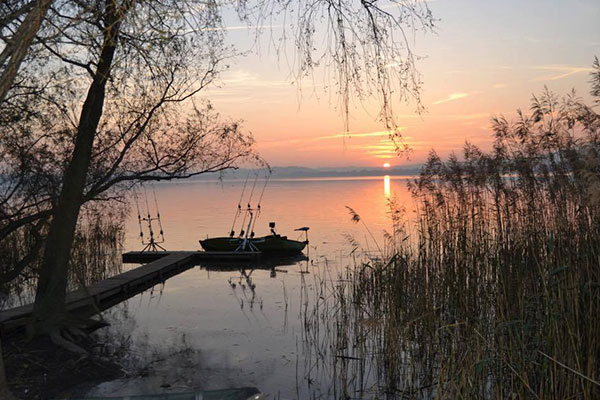