is a municipality of about 2700 inhabitants in the Province of Como, in Lombardy.

Montorfano is a small village that gets its name from the mount that dominates it, Mount Orfano, a small limestone hill so called because of it rises up lonely from the Pre-Alps mountain range that is back of it. Pass the central square of the village, where you can observe some relevant architectural buildings, as the Parrocchiale of San Giovanni Evangelista, Villa Manusardi, actual seat of the City Hall, and Villa Barbavara, get the lath the brings you to the peak of the mount.
Here you can admire the remains of “castrum” used as military fortress, especially during the medieval period. Noteworthy is as Federico Barbarossa and his soldiers have uses it after the defeat of the Battle of Tassera in 1160. The legend tells the tears of the Mounts, spilled for its loneliness, gave origin to a very suggestive small lake, the Montorfano Lake, one of the minor lake of Brianza. The route the delimits it, recognised as Riserva Naturale e Sito di Interesse Comunitario, is walkable in about an hour. This is not the only area with green importance: you don’t forget the Brughiera Comasca, a territory rich of points of interest non only naturalistic, but also artistic-architectural, as ancient farmsteads, villas and other jewels of art and faith, conveniently indicated. 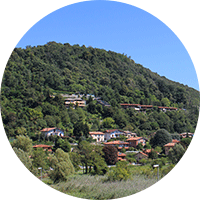 Starting from Piazza Roma and getting via Mandelli to walk up to Mount Orfano, from where reach the remains of Barbarossa’s castle at the peak and enjoy the panorama. Duration of the walk: about an hour.

From generation to generation is handed the story of the little mountain at whose foot rests Montorfano. This story is still told to sons and, always the same and using the same words. The story tells almost so…

“Il little Mount, whose takes the name the town, is called Orfano because rises lonely and isolated in a flat area. To North, its older brothers observe it all together, one close to the other. The Mount, sad and sorrowful, cried every night, when nobody can see flowing its drops. But in a morning, when the sun was rising, it became aware that its drops have create a little lake at its foot, the Lake Montorfano. From that day the little Monte Orfano was not sad more: he looked down to the lake as a mirror and felt less alone.”

This story for kids is founded on a particularity of this territory, that is evident for everyone who rises up above Monte Orfano: the hill, 554mt of altitude, not exactly a mount, is really rounded by flat zones, becoming the only one upland on the surrounding territory.
This characteristic makes it a place with an high strategic relevance, and from there it was possible to control all the surroundings. On the top of the hill there was in fact an ancient fortified structure of Gallic origin, destroyed by Romans during the conquest of Gaul. The fortress, rebuilt more than a time, was object of fights during the centuries, which involved the peaceful inhabitants of nearby Montorfano. The most famous guest of the castle was certainly Federico Barbarossa, who retired there its soldiers after the strong defeat of the battle of Tassera in 1160, in Carcano. The fortress stopped to exist, as a simple defence point yet, in 1600, when Carlo V chose to teared it down. From that time, Montorfano has a peaceful story, finally ended the period of fights that flared up on its territory cause of its fortress. Today, from the town centre, it is possible to reach Monte Orfano easily, where you can see the last remains of the Barbarossa’s fortress, but there you can have a spectacular view above Lake Montorfano and the land that extends to the South. In the limpid days you could see Milano, too: it is easy to understand the importance of this place and the battles for the control of it. 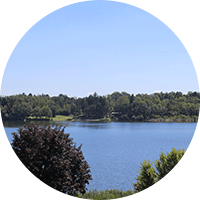 From Piazza Roma get, by via Como or Via Cantù, the lathes of the ring that run long Montorfano Lake in the namesake Natural Reserve. The duration of the route: about an hour.

Lake Montorfano is the smallest lake of Brianza. Beyond its modest size, the round form and the always cold water make it the most strange lake of Triangolo Lariano. The origin of Lake Montorfano is connected to the erosion actions of glacier dated to Late Pleistocene. The expansion of the glaciers has dug in fact the tank that now hosts the lake, and their retire has left rocks to close the basin, blocking the water in. From the streets of the town you can easily enter the path at the lake, walking around the lake for 4 km in an easy walk. The nature lovers will note that the real boss of the lake is the flora: thick rushes round the docks, becoming home for several species of animals.
Groups of mallards constantly patrol the water of the lake, and, if you pay attention and you are lucky, you can admire a belted kingfisher.
The underwater dives of these birds churn up the lilies and water chestnuts that float on the surface, forcing fishes to seek refuge among underwater vegetation to avoid to be pray of their sharp beaks. Along the path you can see that Lake Montorfano has not tributaries, the basin is in fact reached by different springs by the rising of aquifer, the reason why the this lake is colder than the others of the area. Nearby the rushes, there are wood of chestnuts and birches on the hills that embraces the lake.

The beauty of the lake, but also its richness of flora and fauna, have always represented a strong attraction for human: on the northern bank of the lake there was founded remains of a dwelling settlement from the Bronze Age.

Villa Barbavara is more recent, born to defensive aims in XV cent. and then object of radical changes that give to it the typical aspect of a XVIII cent. villa. More recent are the ice-houses, those remains are hidden nearby the banks of the lake. The Barbavaras changed the lake into an ice industry, equipping the banks with mechanical tools for the transportation of the largest blocks.
For the lovers of relax, on the South-East bank of the lake it is possible to reach the Lido, large grass area with the access to the water, where, during the summer, it is possible swimming or sunbathing. To protect the integrity of the area, in 1984 it was created the Riserva Naturale Lago di Montorfano; today ir is recognized as Site of Community Interest, and it is trusted by Parco Regionale Valle del Lambro. For years there are organized several didactical events for kids, to increase awareness about the respect to the nature. The future of these lands is in their hands. 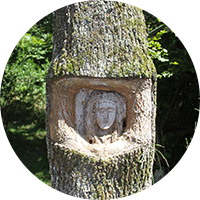 From via Cantù get Viale Rimembranze and via Molino, at the cemetery, then get the lathes those cross the Moorland. The times of walk vary depending on the selected destination (Cascinazza Farm, Airport in Verzago): from one to two hours.

The moorland is a particular natural habitat that represents a poor presence of humus, cause to an acid terrain.
Normally characterized by the presence of low stem flora, the Brughiera of Montorfano also has wooden areas. The banks of Lake Montorfano are in fact the northern board of Parco della Brughiera Briantea, that covers till Meda. More the moorland goes to the South, more the flora becomes low. The paths which start from Montorfano, beyond easy for everyone, are very interesting from a naturalistic point of view.
The suggestions is to start the excursion into the moorland early in the morning, when there are more possibilities to be in contact with the several species of animals those live on the trees and in the wood. The path flows through the heather bushes, those give the name to the territory that characterized. The best period for the excursions into the Park is during the spring or on the summer, where the climate is warmer, meanwhile the heather has pink flowers in the autumn, giving to the wood a magic atmosphere. The shortest route bring you from the board of Montorfano to Cassinazza farm, an oasis of nature immersed into the Brughiera Briantea. During the walk that brings you to the farm you are accompanied by the sings of the birds, impossible to not hear. More complex is to see them: continuing in silence and carefully, you could see some little colourful birds as Pendolino or kingfisher, almost impossible to see owls, buzzards, hawks those nest in these areas. Not only birds live the forest: probably the sound of foot scares them off, but several species of animals wander the wood. To the most patient is suggested to sit down somewhere in silence, enjoy the sounds of the nature and look into the forest: you can see jumping through the trees a few little rodents. Also badgers and skunks live in the park, but they are too shy to be seen by human. During the rainy periods there are boggy zones those become an ideal place for laying eggs of frogs, toads and newts. Kids will love walking through the paths looking for this incredible variety of animals; if they are let down because they do not see anything, do not be afraid: reached Cassinazza Farm, kids can enjoy there with all the farm animals. The farm hosts in fact horses, cows, donkeys, goats, gooses, peacocks which, with the playground, can console every delusion of the kids.
Itinerary

From Lecco: get SS 36 in direction to Milan, until to find SS 342 at Nibionno

From Milan: get S.S. 35, take SP 34 at Cermenate. Follow SP 36 to Cantù to reach Montorfano by SP 28
Get SS 36 and exit at Bergamo/Como, taking SS 342 following the indication to Montorfano 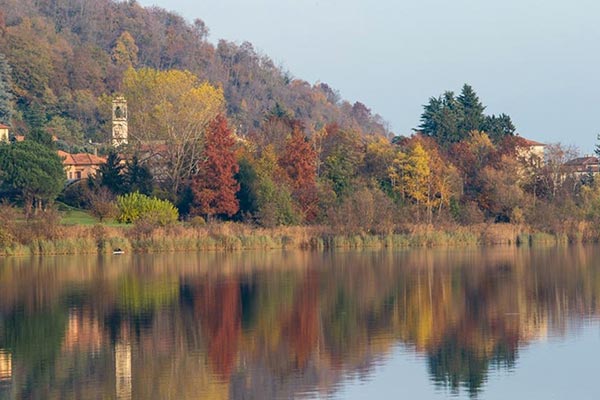 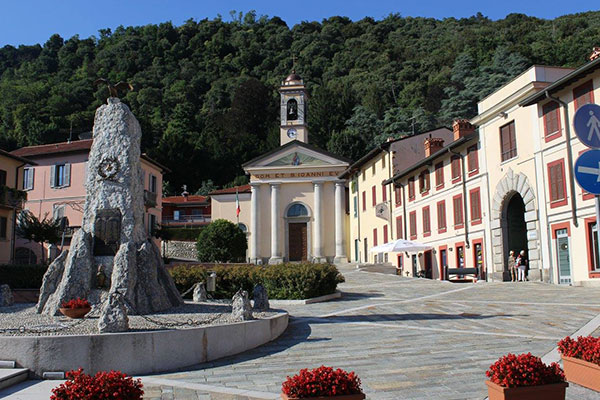 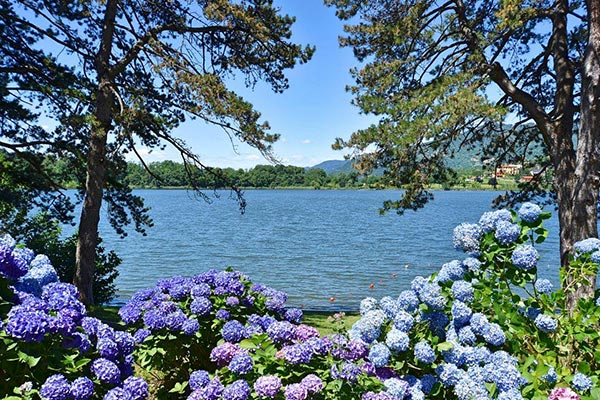